This post explains how you can create a fully serverless and cost-effective Amazon Redshift ETL orchestration framework. To achieve this, you can use Amazon Redshift RSQL and AWS services such as AWS Batch and AWS Step Functions.

The goal of the solution presented in this post is to run complex ETL jobs implemented in Amazon Redshift RSQL scripts in the AWS Cloud without having to manage any infrastructure. In addition to meeting functional requirements, this solution also provides full auditing and traceability of all ETL processes that you run.

You should have the following prerequisites:

To deploy the serverless RSQL ETL framework solution, use the following code. Replace 123456789012 with your AWS account number, eu-west-1 with the AWS Region to which you want deploy the solution, and your.email@example.com with your email address to which ETL success and failure notifications are sent.

The whole process takes a few minutes. While AWS CDK creates all the stacks, you can continue reading this post.

The following code example shows the .odbc.ini file. It defines an etl profile, which uses an AWS Identity and Access Management (IAM) role to get temporary cluster credentials to connect to Amazon Redshift. AWS CDK creates this role for us. Because of this, we don’t need to hard-code credentials in a Docker image. The Database, DbUser, and ClusterID parameters are set in AWS CDK. Also, AWS CDK replaces the Region parameter at runtime with the Region to which you deploy the stacks.

Our Docker image implements a well-known fetch and run integration pattern. To learn more about this pattern, see Creating a Simple “Fetch & Run” AWS Batch Job. The Docker image fetches the ETL script from an external repository, and then runs it. AWS CDK passes the information about the ETL script to run to the Docker container at runtime as an AWS Batch job parameter. The job parameter is exposed to the container as an environment variable called BATCH_SCRIPT_LOCATION. Our job also expects two other environment variables: DATA_BUCKET_NAME, which is the name of the S3 data bucket, and COPY_IAM_ROLE_ARN, which is the Amazon Redshift IAM role used for the COPY command to load the data into Amazon Redshift. All environment variables are set automatically by AWS CDK. The fetch_and_run.sh script is the entry point of the Docker container. See the following code:

This step turns Amazon Redshift RSQL into a serverless service. You can build complex ETL workflows based on this generic job.

AWS CDK then moves to the deployment of the Step Functions state machine. Step Functions enables you to build complex workflows in a visual way directly in your browser. This service supports over 9,000 API actions from over 200 AWS services.

After AWS CDK finishes, a new state machine is created in your account called ServerlessRSQLETLFramework. To run it, complete the following steps:

The Graph view on the details page updates in real time. The state machine starts with a parallel state with two branches. In the left branch, the first job loads customer data into staging table, then the second job merges new and existing customer records. In the right branch, two smaller tables for regions and nations are loaded and then merged one after another. The parallel state waits until all branches are complete before moving to the vacuum-analyze state, which runs VACUUM and ANALYZE commands on Amazon Redshift. The sample state machine also implements the Amazon SNS Publish API actions to send notifications about success or failure.

From the Graph view, you can check the status of each state by choosing it. Every state that uses an external resource has a link to it on the Details tab. In our example, next to every AWS Batch Job state, you can see a link to the AWS Batch Job details page. Here, you can view the status, runtime, parameters, IAM roles, link to Amazon CloudWatch Logs with the logs produced by ETL scripts, and more. 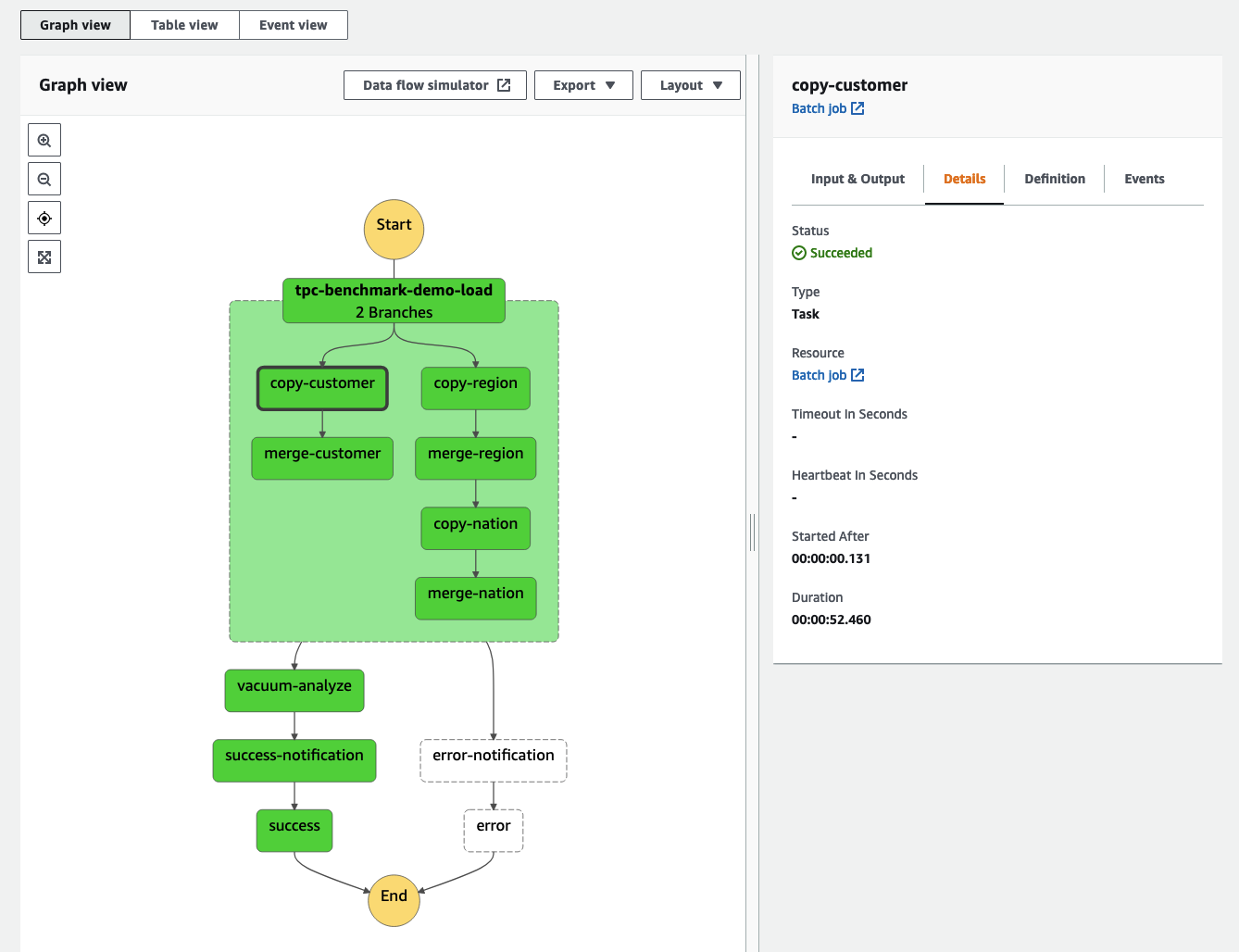 To avoid ongoing charges for the resources that you created, delete them. AWS CDK deletes all resources except data resources such as S3 buckets and Amazon ECR repositories.

Here are some ideas of additional enhancements that you can add to the described solution.

Step Functions integrates natively with over 200 AWS services. This opens a new world of possibilities to AWS customers and partners, who can integrate their processes with other data, analytics, machine learning, and compute services such as Amazon S3, Amazon DynamoDB, AWS Glue, Amazon OpenSearch Service (successor to Amazon Elasticsearch Service), Amazon SageMaker, AWS Lambda, and more. The additional advantage of Step Functions and AWS Batch is that you have full traceability and auditing out of the box. Step Functions shows Graph or Event views together with a complete history for all state machine runs.

In this post, I used RSQL automation scripts as the building blocks of ETL workflows. Using RSQL is a common integration pattern that we see for customers migrating from Teradata BTEQ scripts. However, if you have simple ETL or ELT processes that can be written as plain SQL, you can invoke the Amazon Redshift Data API directly from Step Functions. To learn more about this integration pattern, see ETL orchestration using the Amazon Redshift Data API and AWS Step Functions with AWS SDK integration.