With Redshift Serverless, you can benefit from the following features:

In this post, we discuss four different use cases of Redshift Serverless:

In our first use case, a startup company with limited resources needs to create a new data warehouse and reports for marketing analytics. The customer doesn’t have any IT administrators, and their staff is comprised of data analysts, a data scientist, and business analysts. They want to create new marketing analytics quickly and easily, to determine the ROI and effectiveness of their marketing efforts. Given their limited resources, they want minimal infrastructure and administrative overhead.

In this case, they can use Redshift Serverless to satisfy their needs. They can create a new Redshift Serverless endpoint in a few minutes and load their initial few TBs of marketing dataset into Redshift Serverless quickly. Their data analysts, data scientists, and business analysts can start querying and analyzing the data with ease and derive business insights quickly without worrying about infrastructure, tuning, and administrative tasks. 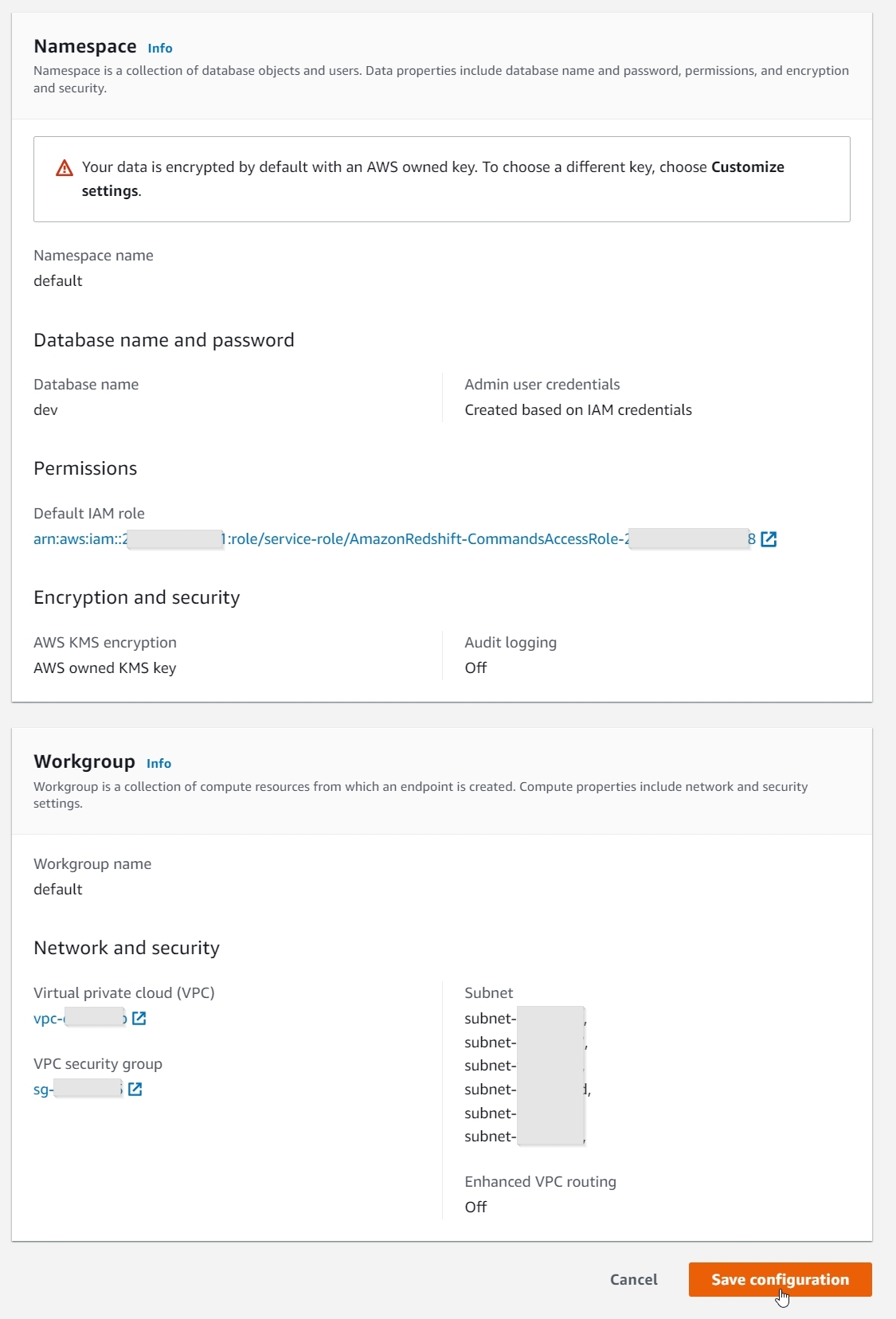 With just a single click, you can create a new Redshift Serverless endpoint in minutes with data encryption enabled, and a default AWS Identity and Access Management (IAM) role, VPC, and security group attached. You can also use the Customize settings option to override these settings, if desired.

Query Editor v2 makes it easy to create database objects, load data, analyze and visualize data, and share and collaborate with your teams. 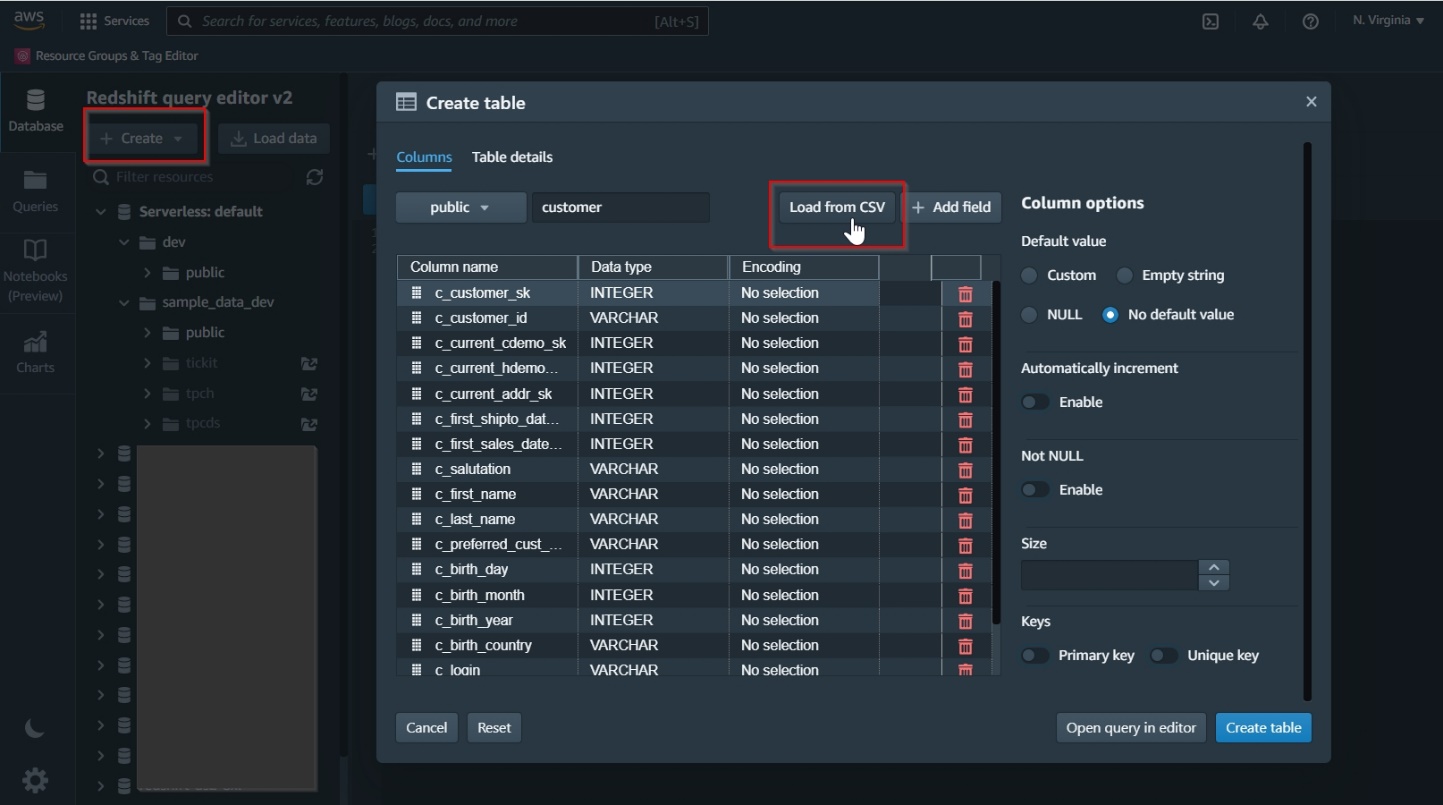 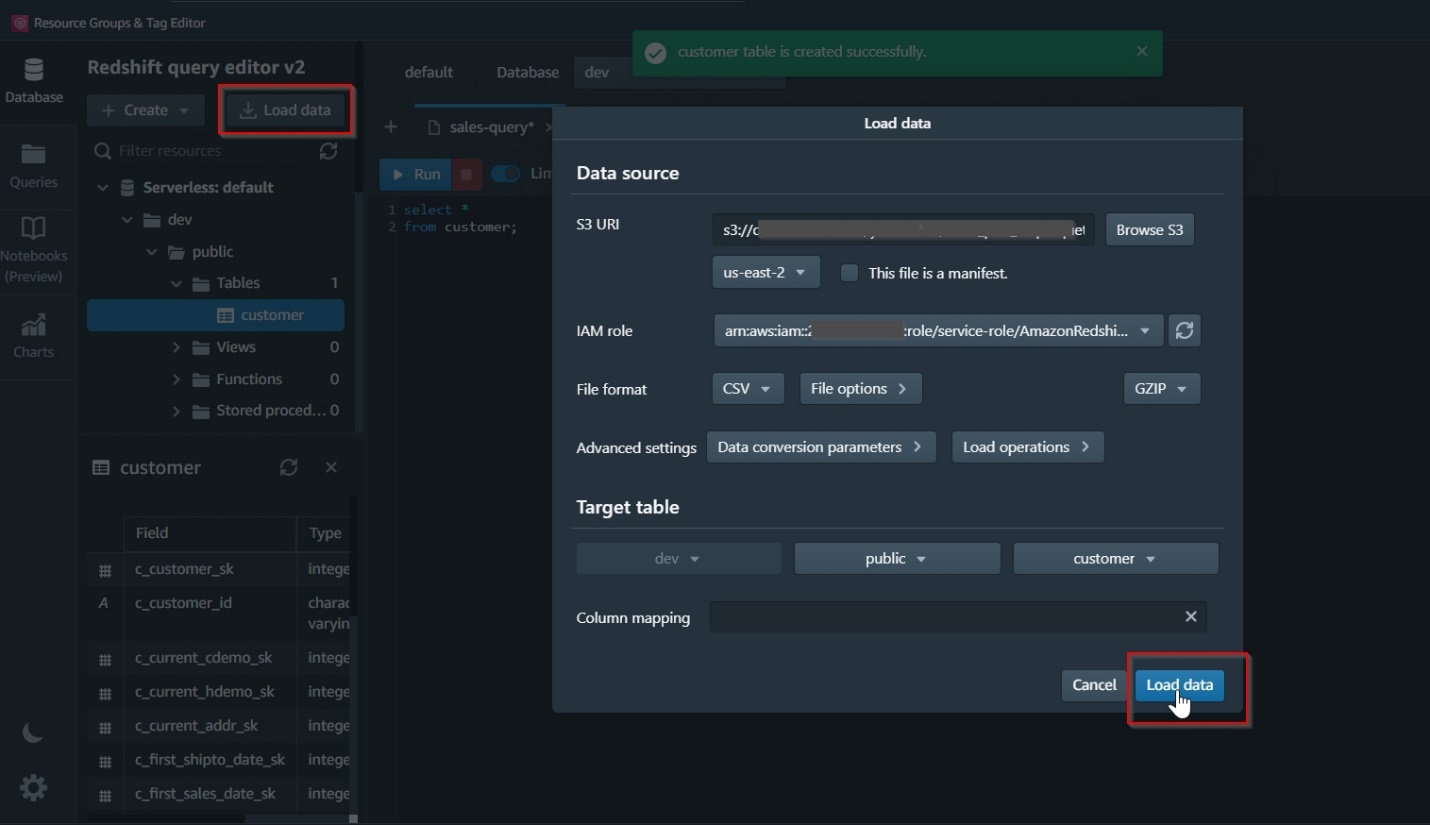 The following screenshot shows an example of analyzing and visualizing data.

In another use case, a customer is currently using an Amazon Redshift provisioned cluster that is right-sized for their current workloads. A new data science team wants quick access to the Amazon Redshift cluster data for a new workload that will build predictive models for forecasting. The new team members don’t know yet how long they will need access and how complex their queries will be.

To address these issues, they decide to let the data science team create their own new Redshift Serverless instance and grant them data share access to the data they need from the existing Amazon Redshift provisioned cluster. The following diagram illustrates the new architecture. 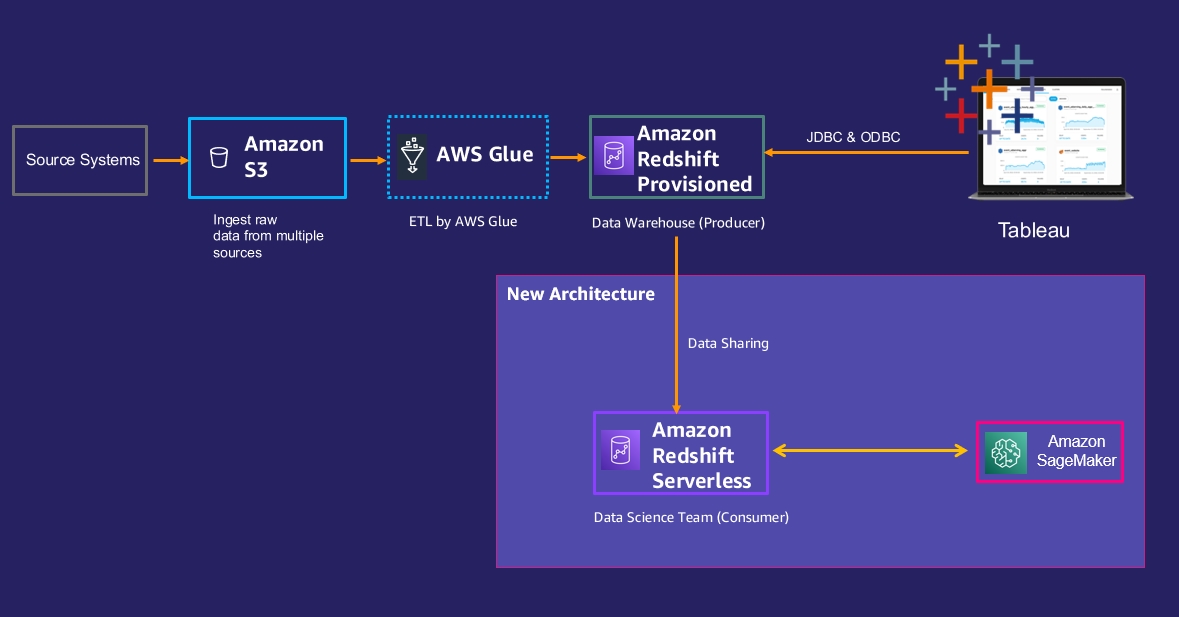 The following steps need to be performed to implement this architecture: 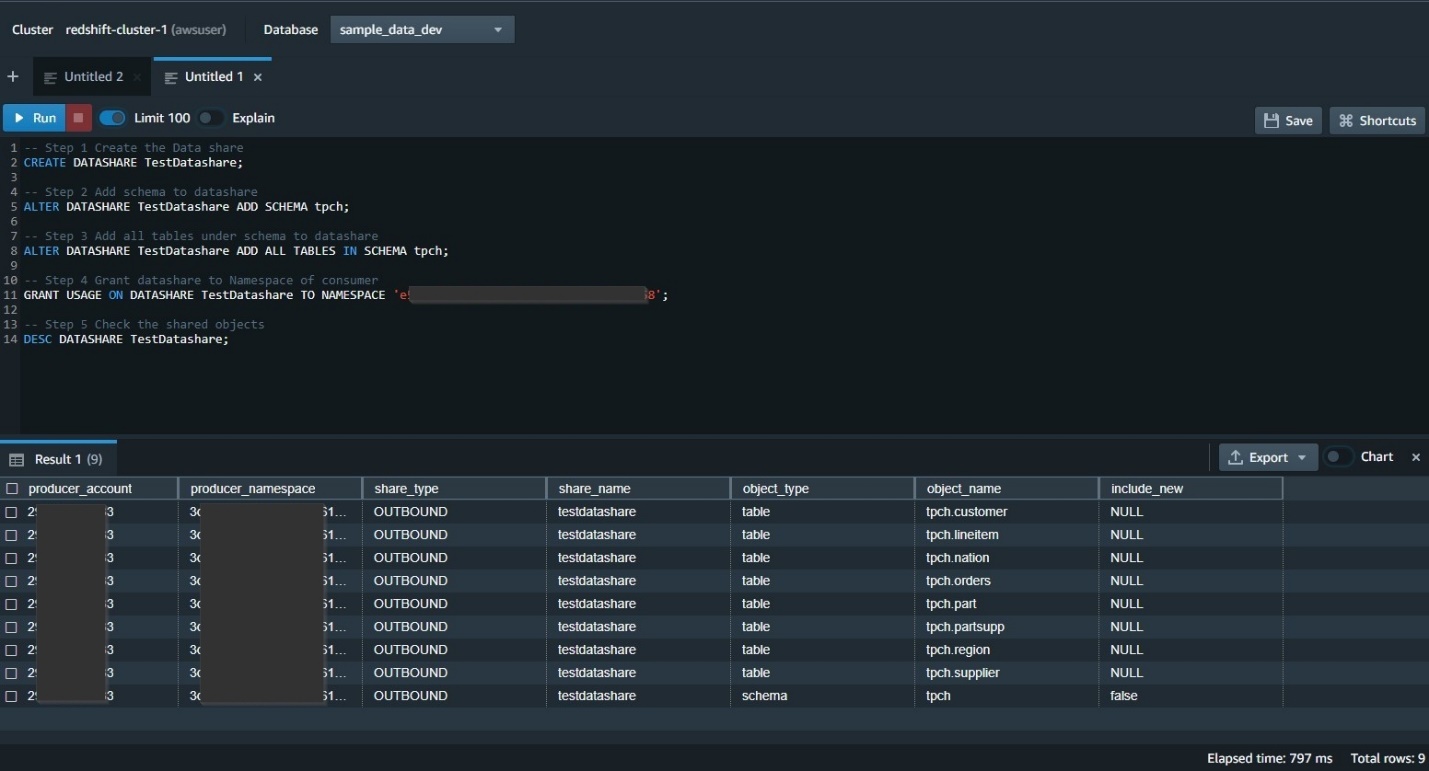 On the Amazon Redshift Serverless consumer, create a database from the data share and then query the shared objects.

With this architecture, we can resolve the three challenges mentioned earlier:

An analysis of the workload on the cluster shows that the cluster has two different workloads:

The provisioned cluster was sized as 12 nodes of ra3.4xlarge to handle both workloads running in parallel.

To optimize these workloads, the following architecture was proposed and implemented: 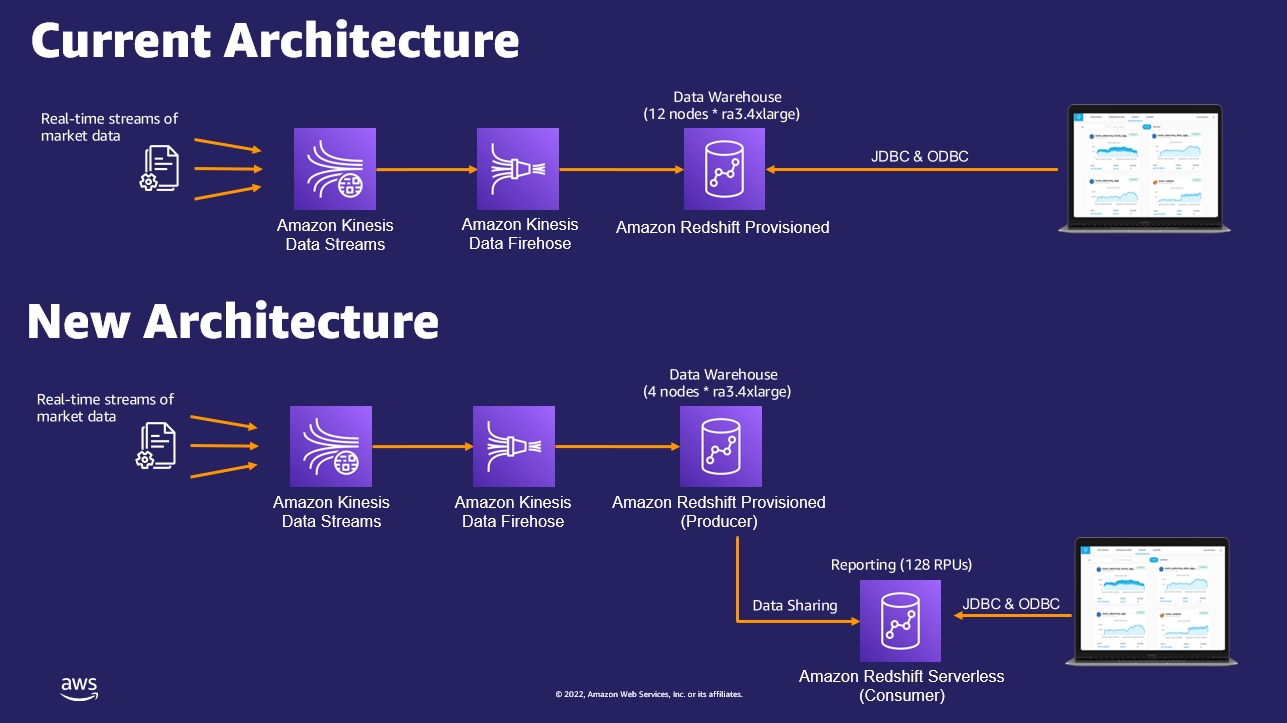 After completing this setup, the customer ran the streaming ingestion workload on the Amazon Redshift provisioned instance (producer) and reporting workloads on Redshift Serverless (consumer) based on the recommended architecture. The following improvements were observed:

Their current Amazon Redshift provisioned producer cluster has 8 nodes of ra3.4xlarge and is located in the us-east-1 Region. The data delivery from the different data sources is scattered between midnight to 8:00 AM, and the data ingestion jobs take around 3 hours to run in total every day. The customer is currently on the on-demand cost model and has scheduled daily jobs to pause and resume the cluster to minimize costs. The cluster resumes every day at midnight and pauses at 8:00 AM, with a total runtime of 8 hours a day.

To optimize the cost of this workload, the following architecture was proposed and implemented: 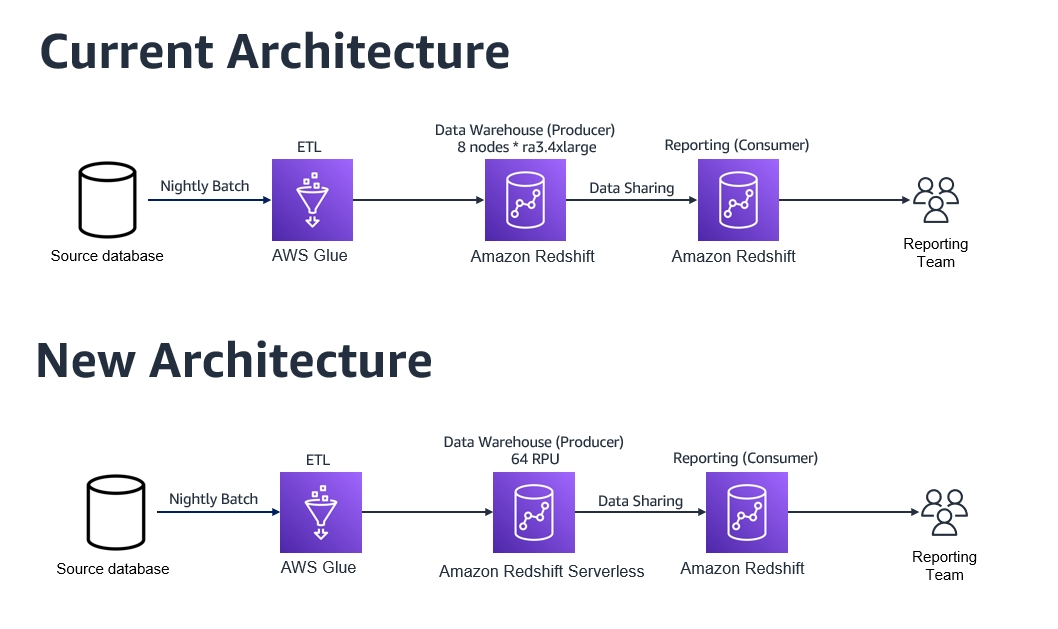 By moving to Redshift Serverless, the customer realized the following benefits:

In this post, we discussed four different use cases, demonstrating the benefits of Amazon Redshift Serverless—from its easy analytics, ease of use, superior performance, and cost savings that can be realized from the pay-per-use pricing model.

Amazon Redshift provides flexibility and choice in data warehousing. Amazon Redshift Provisioned is a great choice for customers who need a custom provisioning environment with more granular controls; and with Redshift Serverless, you can start new data warehousing workloads in minutes with dynamic auto scaling, no infrastructure management, and a pay-per-use pricing model.

We encourage you to start using Amazon Redshift Serverless today and enjoy the many benefits it offers.

Ahmed Shehata is a Data Warehouse Specialist Solutions Architect with Amazon Web Services, based out of Toronto.

Manish Vazirani is an Analytics Platform Specialist at AWS. He is part of the Data-Driven Everything (D2E) program, where he helps customers become more data-driven.

Rohit Bansal is an Analytics Specialist Solutions Architect at AWS. He has nearly two decades of experience helping customers modernize their data platforms. He is passionate about helping customers build scalable, cost-effective data and analytics solutions in the cloud. In his spare time, he enjoys spending time with his family, travel, and road cycling.

The Missing Puzzle Piece of the Modern-Day Enterprise: Responsible AI

The Missing Puzzle Piece of the Modern-Day Enterprise: Responsible AI

MLOps | Is the Enterprise Repeating the Same DIY Mistakes?