High availability (HA) is the property of a system or service to operate continuously without failing for a designated period of time. Implementing HA properties over a system allows you to eliminate single points of failure that usually translate to service disruptions, which can then lead to a business loss or the inability to use a service.

The core idea behind fault tolerance and high availability is very straightforward in terms of definition. You usually use multiple machines to give you redundancy for a specific service. This guarantees that if a host goes down, other machines are able to take over the traffic. Although this might be easy to say, it’s difficult to obtain such a property, especially when working with distributed technologies.

When focusing on Hadoop technologies, the concept of availability multiplies in different layers depending on the frameworks we’re using. To achieve a fault-tolerant system, we need to consider the following layers:

The first two layers are typically handled using native capabilities of the Hadoop framework (such as HDFS High Availability or ResourceManager High Availability) or with the help of features available in the specific framework used (for example, HBase table replication to achieve highly available reads).

When looking at the native setup for a key distribution center (KDC), we can see that the tool comes with a typical primary/secondary configuration, where you can configure a primary KDC with one or more additional replicas to provide some features of a highly available system.

However, this configuration doesn’t provide an automatic failover mechanism to elect a new primary KDC in the event of a system interruption. As a result, the failover has to be performed manually or by implementing an automated process, which can be complex to set up.

With AWS native services, we can improve the MIT KDC capabilities to increase the resilience to failures of our system.

When creating an Amazon EMR security configuration, you’re asked to choose between a cluster-dedicated KDC or an external KDC, so it’s important to understand the benefits and limits of each solution.

The cluster-dedicated KDC is an easy configuration option that delegates the installation and configuration of the KDC service to the cluster itself. This option doesn’t require significant knowledge of the Kerberos system and might be a good option for a test environment. Additionally, having a dedicated KDC in a cluster enables you to segregate the Kerberos realm, thereby providing a dedicated authentication system that can be used only to authenticate a specific team or department in your organization.

However, because the KDC is located on the EMR primary node, you have to consider that if you delete the cluster, the KDC will be deleted as well. Considering the case in which the KDC is shared with other EMR clusters (defined as external KDC in their security configuration), the authentication layer for those will be compromised and as a result all Kerberos enabled frameworks will break. This might be acceptable in test environments, but it’s not recommended for a production one.

Because the KDC lifetime isn’t always bound to a specific EMR cluster, it’s common to use an external KDC located on an EC2 instance or Docker container. This pattern comes with some benefits:

That being said, installing an MIT KDC on a single instance doesn’t address our HA requirements, which typically are crucial in a production environment. In the following section, we discuss how we can implement a highly available MIT KDC using AWS services to improve the resiliency of our authentication system.

The architecture presented in the following diagrams describes a highly available setup across multiple Availability Zones for our MIT Kerberos KDC that uses AWS services. We propose two versions of the architecture: one based on an Amazon Elastic File System (Amazon EFS) file system, and another based on an Amazon FSx for NetApp ONTAP file system.

Both services can be mounted on EC2 instances and used as local paths. Although Amazon EFS is cheaper compared to Amazon FSx for NetApp ONTAP, the latter provides better performance thanks to the sub-millisecond operation latency it provides.

We performed multiple tests to benchmark the solutions involving the different file systems. The following graph shows the results with Amazon EMR 5.36, in which we measured the time in seconds taken by the cluster to be fully up and running when selecting Hadoop and Spark as frameworks.

Looking at the test results, we can see that the Amazon EFS file system is suitable to handle small clusters (fewer than 100 nodes), because the performance degradation introduced by the latency of lock operations on the NFS protocol increases the delay in launching clusters as we add more nodes in our cluster topology. For example, for clusters with 200 nodes, the delay introduced by the Amazon EFS file system is such that some instances can’t join the cluster in time. As a result, those instances are deleted and then replaced, making the entire cluster provisioning slower. This is the reason why we decided not to publish any metric for Amazon EFS for 200 cluster nodes on the preceding graph.

On the other side, Amazon FSx for NetApp ONTAP is able to better handle the increasing number of principals created during the cluster provisioning with reduced performance degradation compared to Amazon EFS.

Even with the solution involving Amazon FSx for NetApp ONTAP, for clusters with a higher number of instances it’s still possible to encounter the behavior described earlier for Amazon EFS. Therefore, for big cluster configurations, this solution should be carefully tested and evaluated.

The following diagram illustrates the architecture of our Amazon EFS based solution. 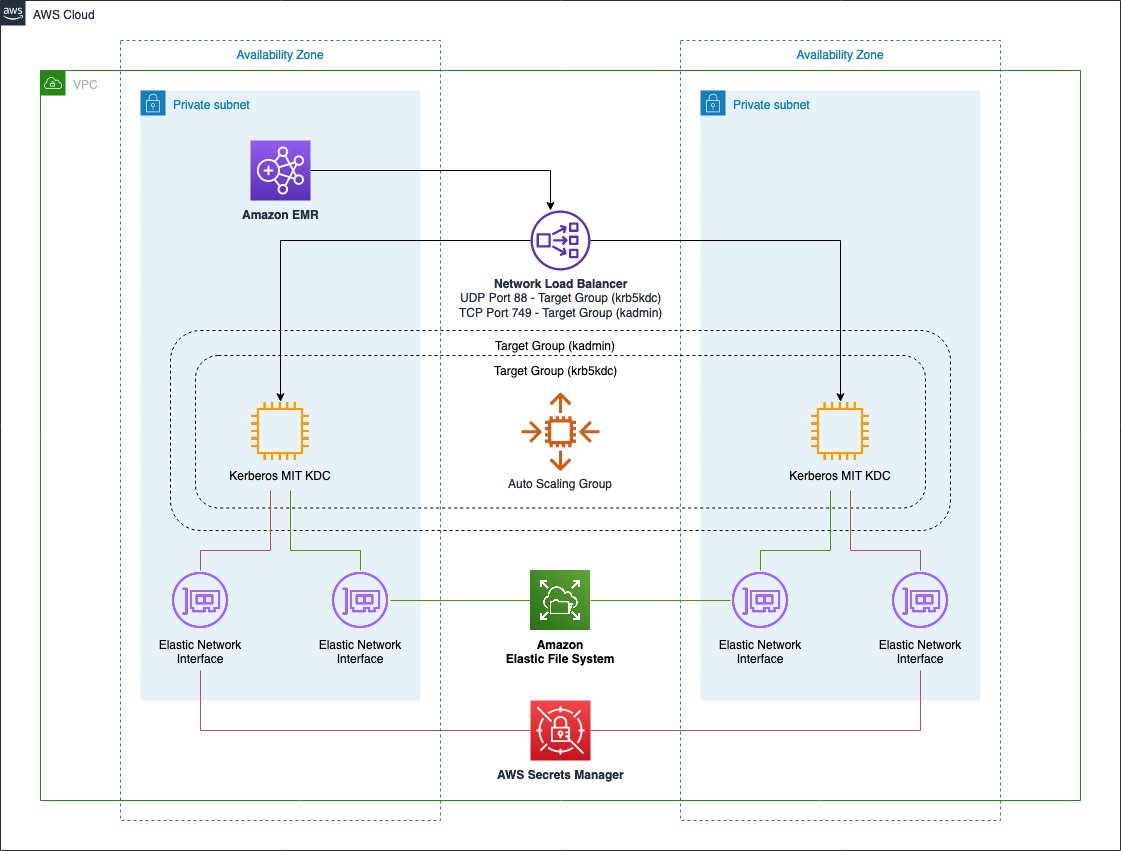 The infrastructure relies on different components to improve the fault tolerance of the KDC. The architecture uses the following services:

With this configuration, we eliminate the downsides resulting from a single instance installation: 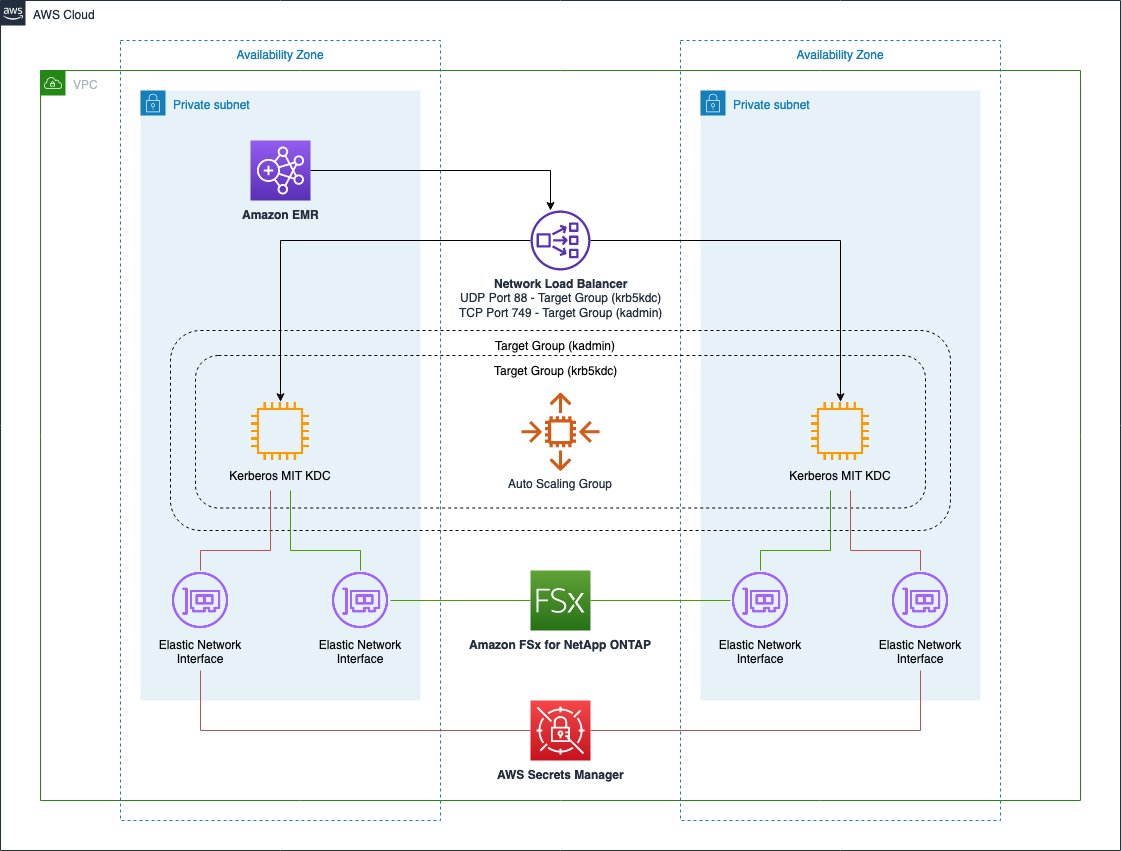 This infrastructure is almost identical compared to the previous one and provides the same benefits. The only difference is the utilization of a Multi-AZ Amazon FSx for NetApp ONTAP file system as a persistent and reliable storage layer for our KDC database. Even in this case, the service comes with built-in HA properties so we can take advantage of its native features to obtain a persistent and reliable file system.

We provide an AWS CloudFormation template in this post as a general guide. You should review and customize it as needed. You should also be aware that some of the resources deployed by this stack incur costs when they remain in use.

The CloudFormation template contains several nested templates. Together, they create the following:

After the VPC resources are deployed, the KDC nested template is launched and provisions the following components:

At the end of the second template, the EMR cluster is launched with an external KDC set up and, if chosen, a multi-master configuration.

To launch your stack and provision your resources, complete the following steps:

After you’ve provisioned the whole infrastructure, it’s time to test and validate our HA setup.

In this test, we simulate an impairment on a KDC instance. As a result, we’ll see how we’re able to keep using remaining healthy KDCs, and we’ll see how the infrastructure self-recovers by adding an additional KDC as a substitution for the failed one.

We performed our tests by launching the CloudFormation stack and specifying two KDC instances and using Amazon EFS as the storage layer for the KDC database. The EMR cluster is launched with 11 CORE nodes.

After we deploy the whole infrastructure, we can connect to the EMR primary node using an SSH connection to perform our tests.

When inside our primary node instance, we can proceed with our test setup.

At the end of the tests, we have a total number of failed Kerberos authentications.

As we can see from the output result, we didn’t get any failure during this test. However, when repeating the test multiple times, you might still expect to see few errors (one or two on average) that might occur due to the krbr5kdc process stopping while some requests are still authenticating.

Note the kinit tool itself doesn’t have any retry mechanism. Both the Hadoop services running on the cluster and the creation of Kerberos principals during EMR instance provisioning are configured to retry if KDC calls fails.

If you want to automate these tests, you might also consider using AWS Fault Injection Simulator, a fully managed service for running fault injection experiments on AWS that makes it easier to improve an application’s performance, observability, and resiliency.

To clean up all the resources:

Both Amazon EFS and Amazon FSx for NetApp ONTAP are natively integrated with AWS Backup.

AWS Backup helps you automate and centrally manage your backups. After you create policy-driven plans, you can monitor the status of ongoing backups, verify compliance, and find and restore backups, all from a central console.

In this section, we share some additional considerations when using this solution.

The utilization of a shared file system implies a degradation of the performance. In particular, the more Kerberos principals that have to be created at the same time, the more we can see a latency on the overall principals creation process and also on the cluster startup time.

This performance degradation is proportional to the number of parallel KDC requests made at the same time. For example, consider the scenario in which we have to launch 10 clusters, each with 20 nodes connected to the same KDC. If we launch all 10 clusters at the same time, we can potentially have 10×20 = 200 parallel connections to the KDC during the initial instance provisioning for the creation of the frameworks related Kerberos principals. In addition, because the duration of Kerberos tickets for services is 10 hours by default, and because all the cluster services are launched more or less at the same time, we could also have the same level of parallelism for service tickets renewal. If, instead, we launch these 10 clusters with a time gap between them, we’ll have potentially 20 parallel connections and as a result the latency introduced by the shared file system isn’t very impactful.

As discussed earlier in this post, multiple clusters can share the same KDC in case they need to communicate between each other without having to set up a cross-realm trust between the related KDCs. Before attaching multiple clusters to the same KDC, you should evaluate if there is a real need for that, because you might also consider segregating Kerberos realms on different KDC instances to obtain better performance and reduce the blast radius in case of issues.

High availability and fault tolerance are key requirements for EMR clusters that can’t tolerate downtime. Analytics workloads run within those clusters can deal with sensitive data, therefore operating in a secured environment is also essential. As a result, we need a secure, highly available, and fault-tolerant setup.

In this post, we showed one possible way of achieving high availability and fault tolerance for the authentication layer of our big data workloads in Amazon EMR. We demonstrated how, by using AWS native services, multiple Kerberos KDCs can operate in parallel and be automatically replaced in case of failures. This, in combination with the framework-specific high availability and fault tolerance capabilities, allows us to operate in a secure, highly available, and fault-tolerant environment.

Lorenzo Ripani is a Big Data Solution Architect at AWS. He is passionate about distributed systems, open source technologies and security. He spends most of his time working with customers around the world to design, evaluate and optimize scalable and secure data pipelines with Amazon EMR.

Stefano Sandona is an Analytics Specialist Solution Architect with AWS. He loves data, distributed systems and security. He helps customers around the world architecting their data platforms. He has a strong focus on Amazon EMR and all the security aspects around it.

Why DataOps-Centered Engineering is the Future of Data