This post is co-written by Martin Zoellner, Thomas Ehrlich and Veronika Bogusch from BMW Group.

As part of this collaboration, BMW Group is migrating hundreds of data sources across several data domains to the Cloud Data Hub. Several of these sources pertain to BMW Financial Services.

In this post, we talk about how the AWS Data Lab is helping BMW Financial Services build a regulatory reporting application for one of the European BMW market using the Cloud Data Hub on AWS.

In the context of regulatory reporting, BMW Financial Services works with critical financial services data that contains personally identifiable information (PII). We need to provide monthly insights on our financial data to one of the European National Regulator, and we also need to be compliant with the Schrems II and GDPR regulations as we process PII data. This requires the PII to be pseudonymized when it’s loaded into the Cloud Data Hub, and it has to be processed further in pseudonymized form. For an overview of pseudonymization process, check out Build a pseudonymization service on AWS to protect sensitive data .

To address these requirements in a precise and efficient way, BMW Financial Services decided to engage with the AWS Data Lab. The AWS Data Lab has two offerings: the Design Lab and the Build Lab.

The Design Lab is a 1-to-2-day engagement for customers who need a real-world architecture recommendation based on AWS expertise, but aren’t ready to build. In the case of BMW Financial Services, before beginning the build phase, it was key to get all the stakeholders in the same room and record all the functional and non-functional requirements introduced by all the different parties that might influence the data platform—from owners of the various data sources to end-users that would use the platform to run analytics and get business insights. Within the scope of the Design Lab, we discussed three use cases:

Based on these requirements, we developed the following architecture during the Design Lab.

This solution contains the following components:

With the preceding architecture as our long-term target state, we concluded the Design Lab and decided to return for a Build Lab to accelerate solution development.

The typical preparation of a Build Lab that follows a Design Lab involves identifying a few examples of common use case patterns, typically the more complex ones. To maximize the success in the Build Lab, we reduce the long-term target architecture to a subset of components that addresses those examples and can be implemented within a 3-to-5-day intense sprint.

For a successful Build Lab, we also need to identify and resolve any external dependencies, such as network connectivity to data sources and targets. If that isn’t feasible, then we find meaningful ways to mock them. For instance, to make the prototype closer to what the production environment would look like, we decided to use separate AWS accounts for each use case, based on the existing team structure of BMW, and use a consumer S3 bucket instead of BMW network-attached storage (NAS).

The BMW team set aside 4 days for their Build Lab. During that time, their dedicated Data Lab Architect worked alongside the team, helping them to build the following prototype architecture. 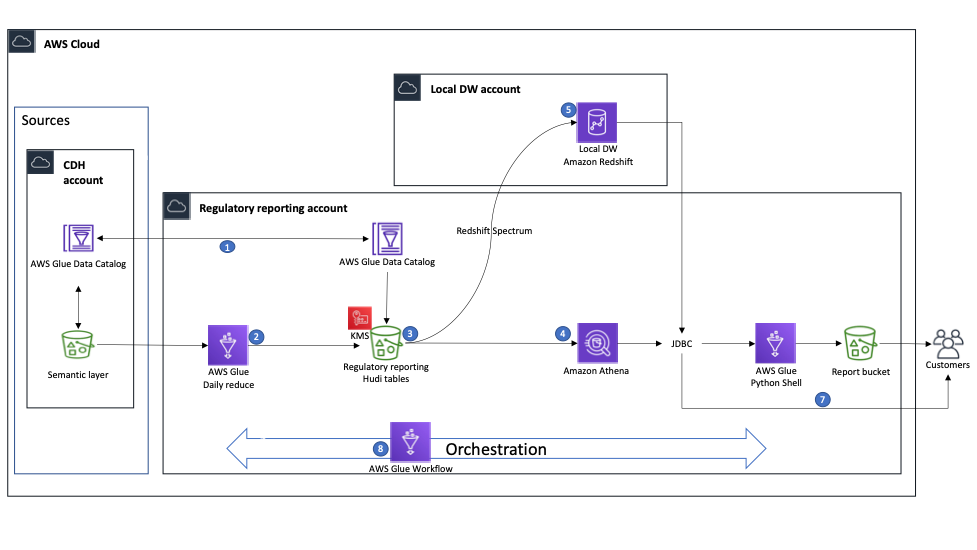 This solution includes the following components:

With that, we completed all the goals we had set up and concluded the 4-day Build Lab.

In this post, we walked you through the journey the BMW Financial Services team took with the AWS Data Lab team to participate in a Design Lab to identify a best-fit architecture for their use cases, and the subsequent Build Lab to implement prototypes for regulatory reporting in one of the European BMW market.

To learn more about how AWS Data Lab can help you turn your ideas into solutions, visit AWS Data Lab.

Special thanks to everyone who contributed to the success of the Design and Build Lab: Lionel Mbenda, Mario Robert Tutunea, Marius Abalarus, Maria Dejoie.

Martin Zoellner is an IT Specialist at BMW Group. His role in the project is Subject Matter Expert for DevOps and ETL/SW Architecture.

Thomas Ehrlich is the functional maintenance manager of Regulatory Reporting application in one of the European BMW market.

Veronika Bogusch is an IT Specialist at BMW. She initiated the rebuild of the Financial Services Batch Integration Layer via the Cloud Data Hub. The ingested data assets are the base for the Regulatory Reporting use case described in this article.

George Komninos is a solutions architect for the Amazon Web Services (AWS) Data Lab. He helps customers convert their ideas to a production-ready data product. Before AWS, he spent three years at Alexa Information domain as a data engineer. Outside of work, George is a football fan and supports the greatest team in the world, Olympiacos Piraeus.

Rahul Shaurya is a Senior Big Data Architect with AWS Professional Services. He helps and works closely with customers building data platforms and analytical applications on AWS. Outside of work, Rahul loves taking long walks with his dog Barney.

Does Financial Crime Increase During a Recession?