Amazon Redshift Serverless measures data warehouse capacity in Redshift Processing Units (RPUs). You pay for the workloads you run in RPU-hours on a per-second basis (with a 60-second minimum charge), including queries that access external data in open file formats like CSV and Parquet stored in Amazon S3. For more information on RPU pricing, refer to Amazon Redshift pricing.

TPC-DS is a commonly used benchmark for measuring the query performance of data warehouse solutions such as Amazon Redshift. The benchmark is useful in proving the query capabilities of executing simple to complex queries in a timely manner. It is also used to measure the performance of different database configurations, different concurrent workloads, and also against other database products.

This blog post walks you through the steps you’ll need to set up Amazon Redshift Serverless and run the SQL queries derived from the TPC-DS benchmark against data from the AWS Data Exchange.

We will get started by creating an Amazon Redshift Serverless workgroup and namespace. A namespace is a collection of database objects and users while a workgroup is a collection of compute resources. To simplify executing the benchmark queries, a Linux EC2 instance will also be deployed.

Next, a GitHub repo containing the TPC-DS derived queries will be used. The TPC-DS benchmark is frequently used for evaluating the performance and functionality of cloud data warehouses. The TPC-DS benchmark includes additional steps and requirements to be considered official, but for this blog post, we are focused on only executing the SQL SELECT queries from this benchmark.

The last component of the solution is data. The TPC-DS benchmark includes binaries for generating data, but this is time-consuming to run. We have avoided this problem by generating the data, and we have made this available freely in the AWS Data Exchange.

Click the Launch Stack link above to launch the CloudFormation stack, which will automate the deployment of resources needed for the demo. The template deploys the following resources in your default VPC:

Here are the high-level steps to create an Amazon Redshift Serverless workgroup. You can get more detailed information from this News Blog post.

To create your workgroup, complete the following steps:

These steps create an Amazon Redshift Serverless workgroup with 128 RPUs. This is the default; you can easily adjust this up or down based on your workload and budget constraints.

TPC-DS includes a utility to generate data for the benchmark at a given scale factor. The smallest scale factor is 1 GB (uncompressed). Most benchmark tests for cloud warehouses are run with 3–10 TB of data because the dataset is large enough to stress the system but also small enough to complete the entire test in a reasonable amount of time.

There are six database schemas provided in the TPC-DS Benchmark Data subscription with 1; 10; 100; 1,000; 3,000; and 10,000 scale factors. The scale factor refers to the uncompressed data size measured in GB. Each schema refers to a dataset with the corresponding scale factor.

The following steps will create external schemas in your Amazon Redshift Serverless database that maps to schemas found in the AWS Data Exchange.

Some data warehouse products are configured to optimize single-user performance, whereas others may not have the ability to manage the workload effectively. This is a great way to demonstrate the workload management and stability of Amazon Redshift.

Since the data for each scale factor is located in a different schema, running the benchmark against each scale factor requires changing the schema you are referencing. The search_path defines which schemas to search for tables when a query contains objects without a schema included. For example:

Note: The scripts create a schema called tpcds_reports which will store the detailed output of each step of the benchmark. Each time the scripts are run, this schema will be recreated, and the latest results will be stored. If you happen to already have a schema named tpcds_reports, these scripts will drop the schema.

Here are the default values for the variables you can set:

We performed a test with the 3 TB ADX TPC-DS dataset on an Amazon Redshift Serverless workgroup with 128 RPUs. Additionally, we disabled query caching so that query results aren’t cached. This allows us to measure the performance of the database as opposed to its ability to serve results from cache.

The test comprises two sections. The first will run the 99 queries serially using one user while the second section will start multiple sessions based on the configuration file you set earlier. Each session will run concurrently, and each will run all 99 queries but in a different order.

The total runtime for the single-user queries was 15 minutes and 11 seconds. As shown in the following graph, the longest-running query was query 67, with an elapsed time of only 101 seconds. The average runtime was only 9.2 seconds. 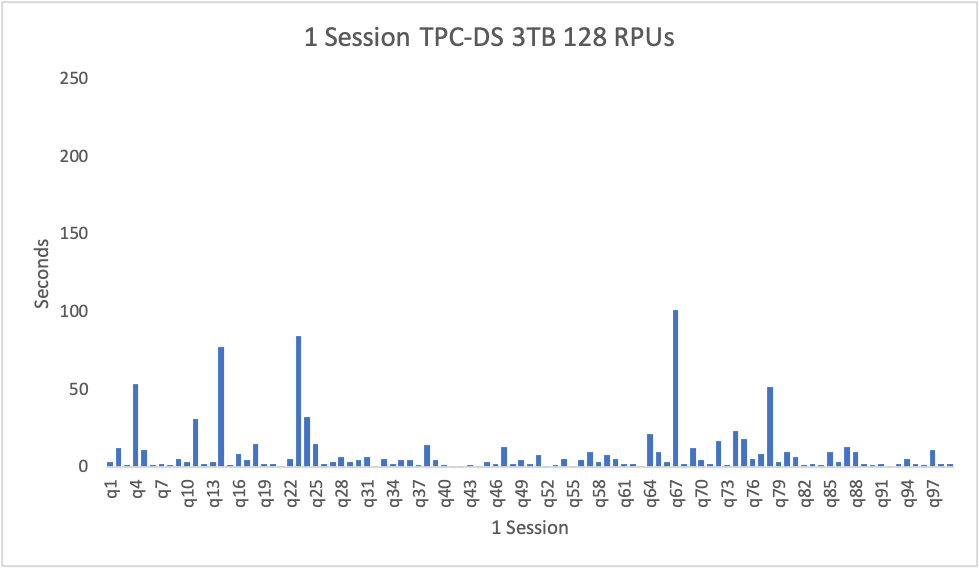 With five concurrent users, the runtime was 28 minutes and 35 seconds, which demonstrates how Amazon Redshift Serverless performs well for single-user and concurrent-user workloads. 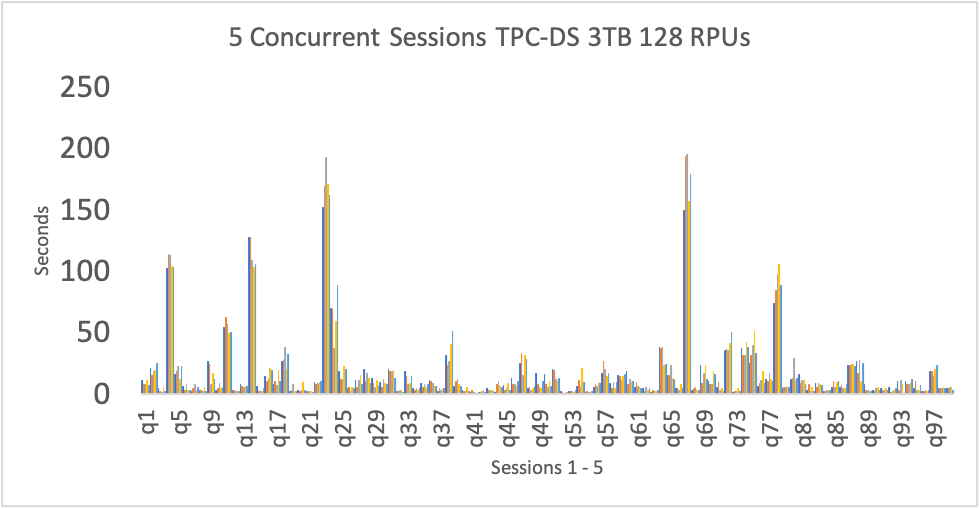 As you can see, it was pretty easy to deploy Amazon Redshift Serverless, subscribe to an AWS Data Exchange product listing, and run a fairly complex benchmark in a short amount of time.

You can run the benchmark scripts again but with different dataset sizes or a different number of concurrent users by editing the tpcds_variables.sh file. You can also try resizing your Amazon Redshift Serverless workgroup to see the performance difference with more or fewer RPUs. You can also run individual queries to see the results firsthand.

If you deployed the resources with the automated solution, you just need to delete the stack created in CloudFormation. All resources created by the stack will be deleted automatically.

If you deployed the resources manually, you need to delete the following:

Optionally, you can unsubscribe from the TPC-DS data by going to your AWS Data Exchange Subscriptions and then turning Renewal to Off.

If you have any questions or feedback, please leave them in the comments section.

Jon Roberts is a Sr. Analytics Specialist based out of Nashville, specializing in Amazon Redshift. He has over 27 years of experience working in relational databases. In his spare time, he runs.

What is “Hyper Data Collection” and Why is More Sophisticated Data Protection Required as a Result of This?

What is "Hyper Data Collection" and Why is More Sophisticated Data Protection Required as a Result of This?

You Can’t Hit What You Can’t See